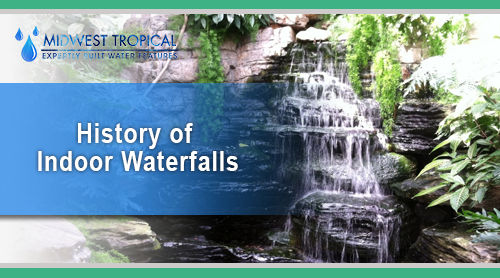 The concept of indoor water features has trickled over from outdoor fountains that were found in early modern Europe. They were seen in elaborate gardens of the wealthy and can still be spotted in urban designs of modern times. Initially, towns and communities depended on functioning water fountains to funnel water for washing, preparing food, and cleaning. Gravity was the power source of water features up until the nineteenth century. Indoor waterfalls work on the same concept, but Midwest Tropical has used advanced technology to utilize water and enhance all indoor spaces’ aesthetic value.

The first water features or fountains didn’t resemble the image that pops up in our mind when we think of a fountain. The earliest known fountain was a carved stone basin that contained precious holy, drinking, and ceremonial water believed to exist around 2000BC.

Since there was no indoor plumbing, the ancient water features were often situated near rivers and streams to supply drinking water. The thought of using indoor waterfalls as decoration was initiated by the Romans in 6 BC. These water features were mostly bronze or stone masks of local and mythological heroes and those of animals.

The Romans had free-standing water fountains that had water coming out via lead pipes under the street.

The water features saw a decline in popularity during the middle ages and could only be found in literature, art and monasteries, and palace gardens. During those times, water fountains were perceived as symbols of wisdom, purity, life, and innocence. All of these characters are still exemplified through water and said to hold the secret of life.

Water features saw a surge in the medieval era but still remained familiar with isolated areas. Some fountains during this time were also used for amusement apart from being decoration pieces.

The Renaissance of Water Features

Water features developed into grand and elaborate fixtures during the European rebirth. The famous fountains of Europe were built in this period and were considered regal tributes. Fountains underwent a revival as the old aqueducts of Rome were rebuilt and restored, providing ample water supply to the fountains.

Water Features in the Contemporary World

The last century has seen a tremendous change in the function and style of indoor waterfalls. By the 1900s, water features were used solely for decorative purposes as widespread indoor plumbing became accessible to the masses. Mechanical water pumps replaced gravity as the main source of power to drive water into the feature. These were the frontrunners of modern water features that would recycle water efficiently.

Today you can see the prevalence of indoor water features in every place imaginable, from restaurants to healthcare facilities. Their acclaim lies in their ability to bring class and elegance while remaining understated style statements that don’t distract from the main theme. Their purpose is far and varied, from being used as decorative pieces to room dividers and partitions.

Water features have evolved in form and function throughout history, and technology has made them exquisite options to elevate aesthetics and exude classic vibes. They are incredible opportunities for businesses to showcase their regality and conscious efforts to promote elegance via natural elements.

Midwest Tropical can match your design concept right down to each detail, from all sizes of indoor waterfalls to customized bubble walls. Human beings can never tired of water features since their genes are mystified by natural elements. This is why water features have found their way into every private property, from residences to corporate offices.